The Levy Allocation Committee in Spring 2020 approved $68 million in 85 new funding investments, which were then approved by City Council, with funding beginning July 1.  The Allocation Committee in November 2020 approved $1 million in eight new funding investments for the Levy's Small Grants Fund, with Portland City Council approving the AC funding a month later in December.

Background: The Levy was created in 2002 and must be approved by voters every five years. Voters most recently renewed the Levy in Spring 2018 for another five years beginning July 1, 2019. PCL typically launches a competitive funding round after each time the Levy is renewed to make investments in programs serving children and families in Portland.

In preparation for the 2019-20 funding process, PCL compiled key local data on Portland’s children, revised its grantmaking process and engaged community members and service providers in discussion on needed services. Full reports can be found at the links below.

Portland’s Children: Overview of Key Local Data. This report from Fall 2018 summarizes data from various local and state sources and provides a current snapshot of children in Portland -- who they are and population-level outcomes -- in the context of the Levy’s six program areas.

Grantmaking Improvement Study by Portland State University. This 2018 study looked at the major phases of the Levy grantmaking process (pre-application, application and decision-making), and included 30 recommendations to increase transparency and equity.  Most of these recommendations were adopted, including the creation of a  Small Grants Fund to improve equity of access to Levy funding for smaller organizations.

In May 2019 the Levy's Allocation Committee  adopted final strategies in each Levy program area  based on these reports.

A total $68.3 million projected to be available over three years (2020 –2023) was allocated between Levy program areas as follows:

For more information on funding results and feedback on the process, see the Preliminary Report. 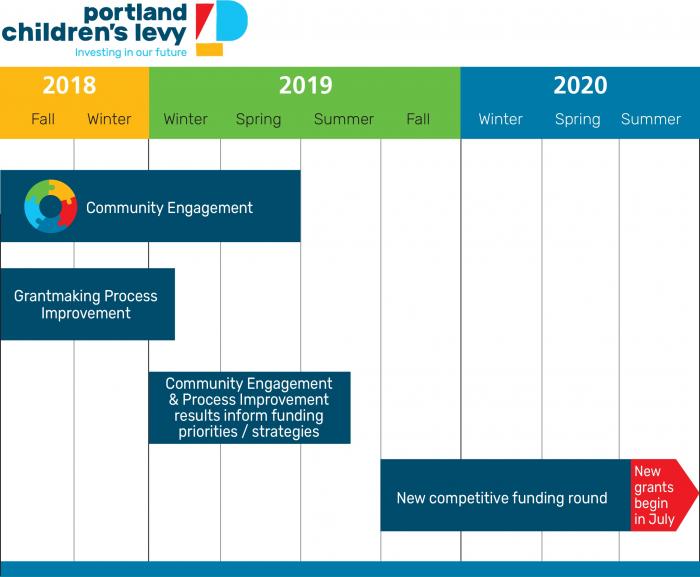